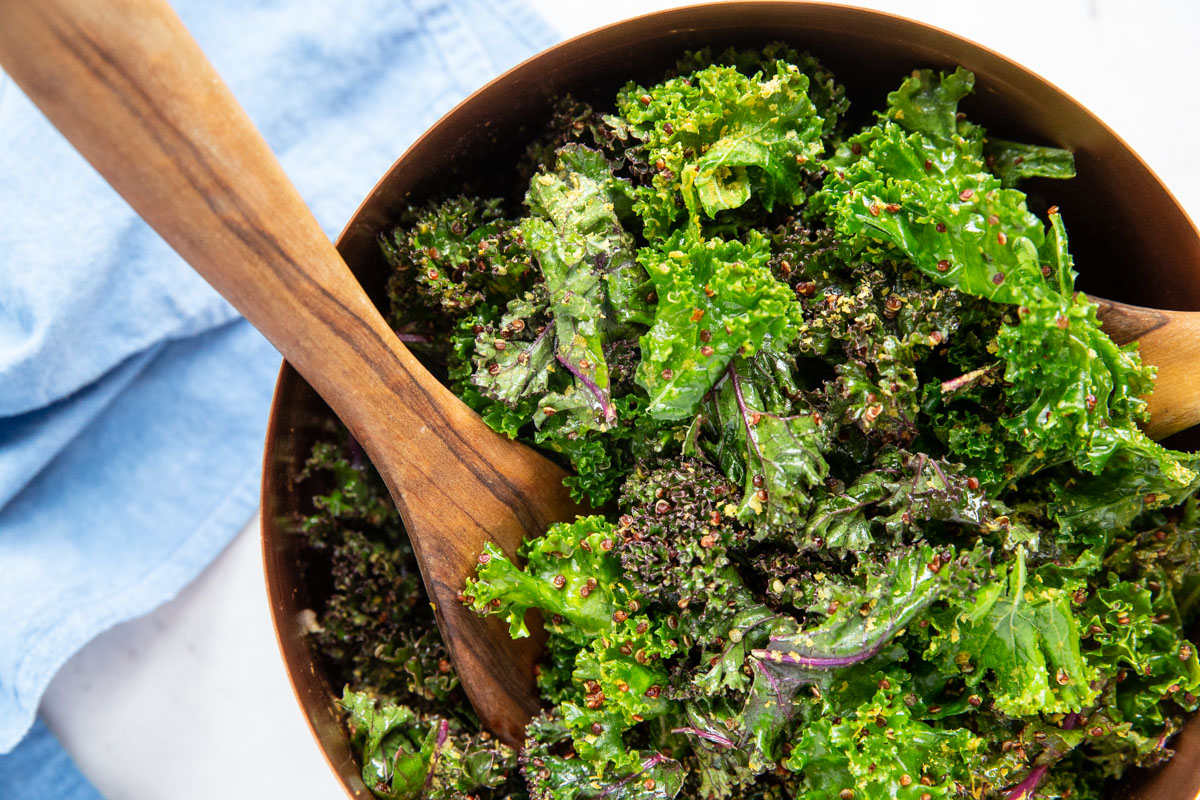 This Vegan Kale Caesar Salad Recipe is so full of flavor that you’d never know it was a vegan salad. Using nutritional yeast in a vegan salad is the secret to making it so cheesy and delicious. I use Bob’s Red Mill Nutritional Yeast and Red Quinoa for this recipe.

An early recipe on this blog, and one of my first videos, is a massaged kale salad recipe.  I keep coming back to this way of making a kale salad because its just THE BEST WAY, maybe the only way, you should ever make a kale salad.  Massaging the dressing into the kale is more than therapeutic (and believe me when I say it is), but it transforms the kale into something completely new.

Maybe you’ve had a kale salad before and been totally turned off then tried it again but couldn’t explain why you liked it? There are basically two types of raw kale salads, one that has been softened and one that has not so the leaves remain tough and bitter.

How do you soften kale for a salad?

There’s only one way to do this and you must get your hands a little messy.  If you’re like me, you don’t mind working with your hands in the kitchen.  This is totally a hands on, put the utensils down, type of task.  You must ‘massage’ your kale. Which is basically rubbing the oils of the dressing into the leaves to wilt the greens and soften them.

Why Massage your Kale Salad

There’s a bitterness and toughness to kale and massaging the dressing into the leaves takes that edge off. It takes a few minutes to cover all of the leaves well and you must use your hands.  It’s therapeutic, for me (and the kale) and the result is shiny kale without the rough texture. The kale will even reduce in size, like it would if you were sautéing it. It actually wilts. 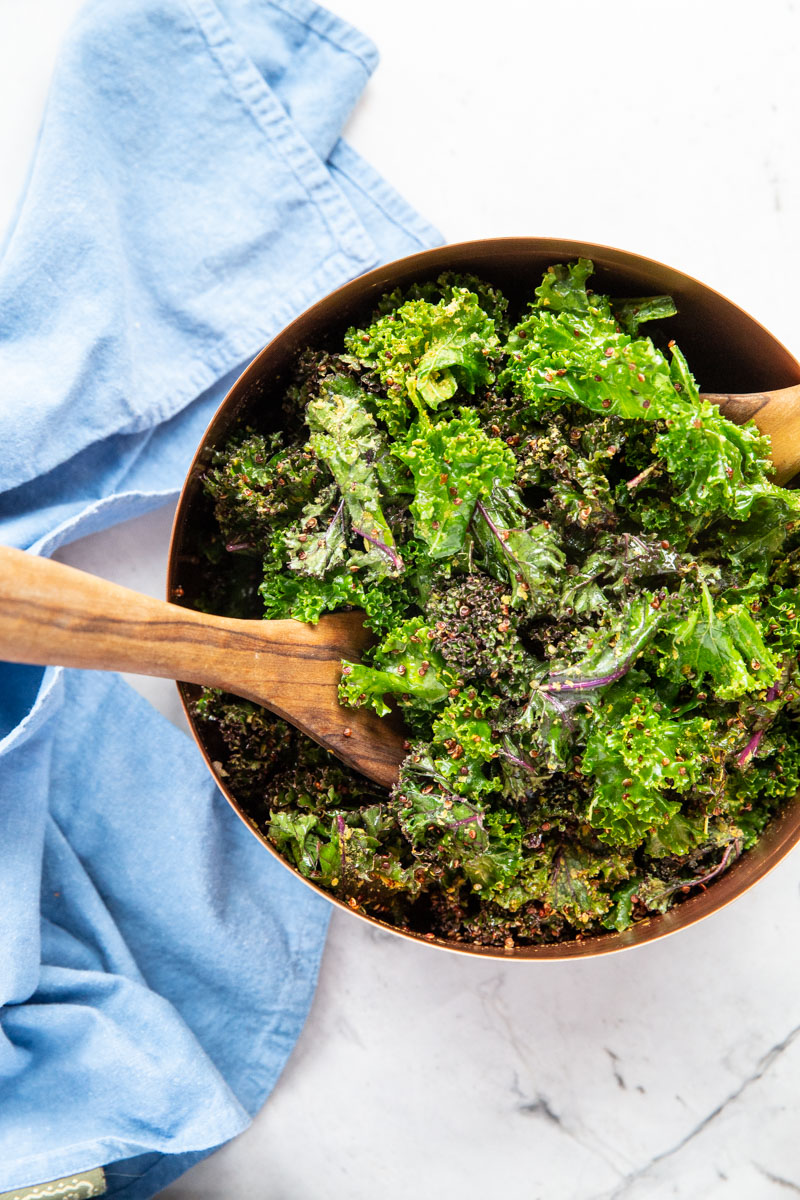 The other secret to this salad is nutritional yeast, which adds a cheesy flavor and just boosts the overall taste of the salad.

What is Nutritional Yeast

Other Uses for Nutritional Yeast 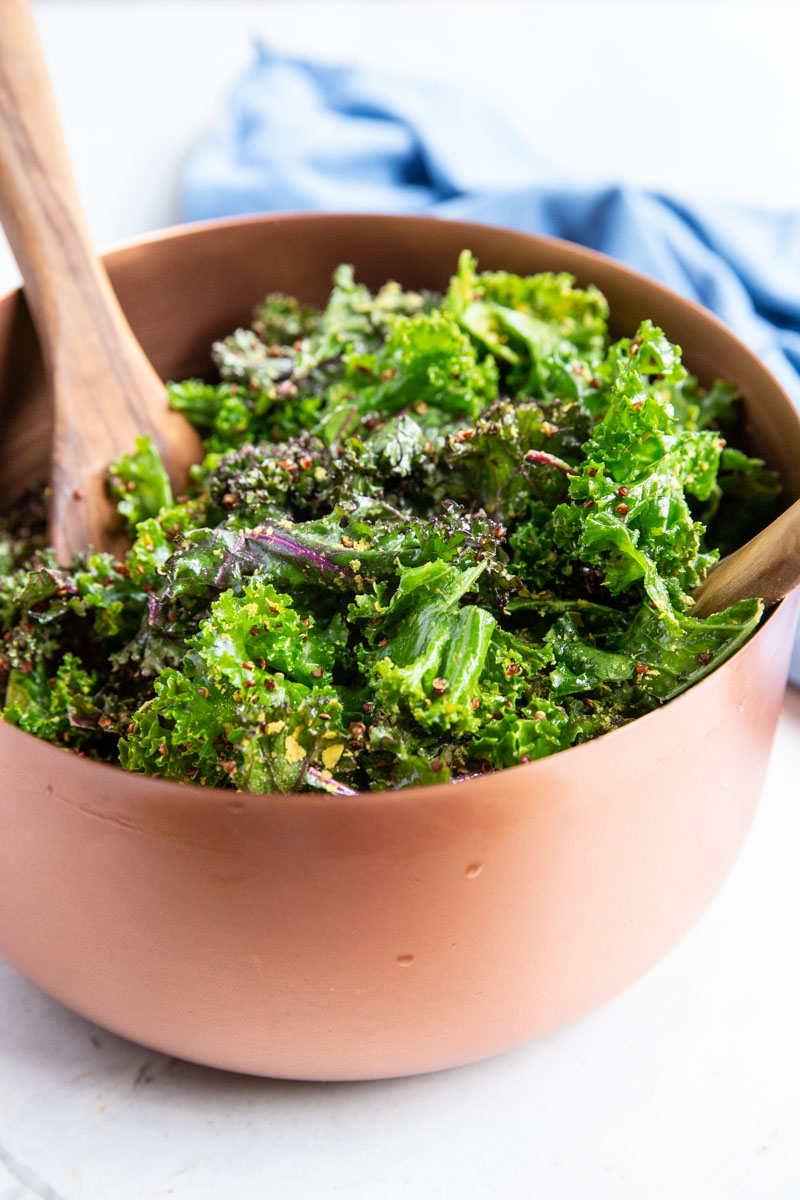 Though this salad is totally perfect on it’s on I also feel like this salad is the perfect pallet to add any seasonal veggies to.  Fresh cherry tomatoes, sliced cucumbers, diced avocado, or thin cut radishes would all be perfect additions. Or, if you’re not vegan, soft boil an egg on top for a real delicious treat.   This kale salad recipe is a totally game changer as far as kale salads go!  Enjoy. 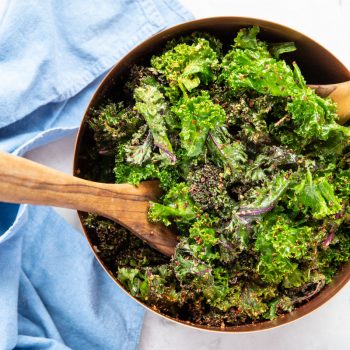