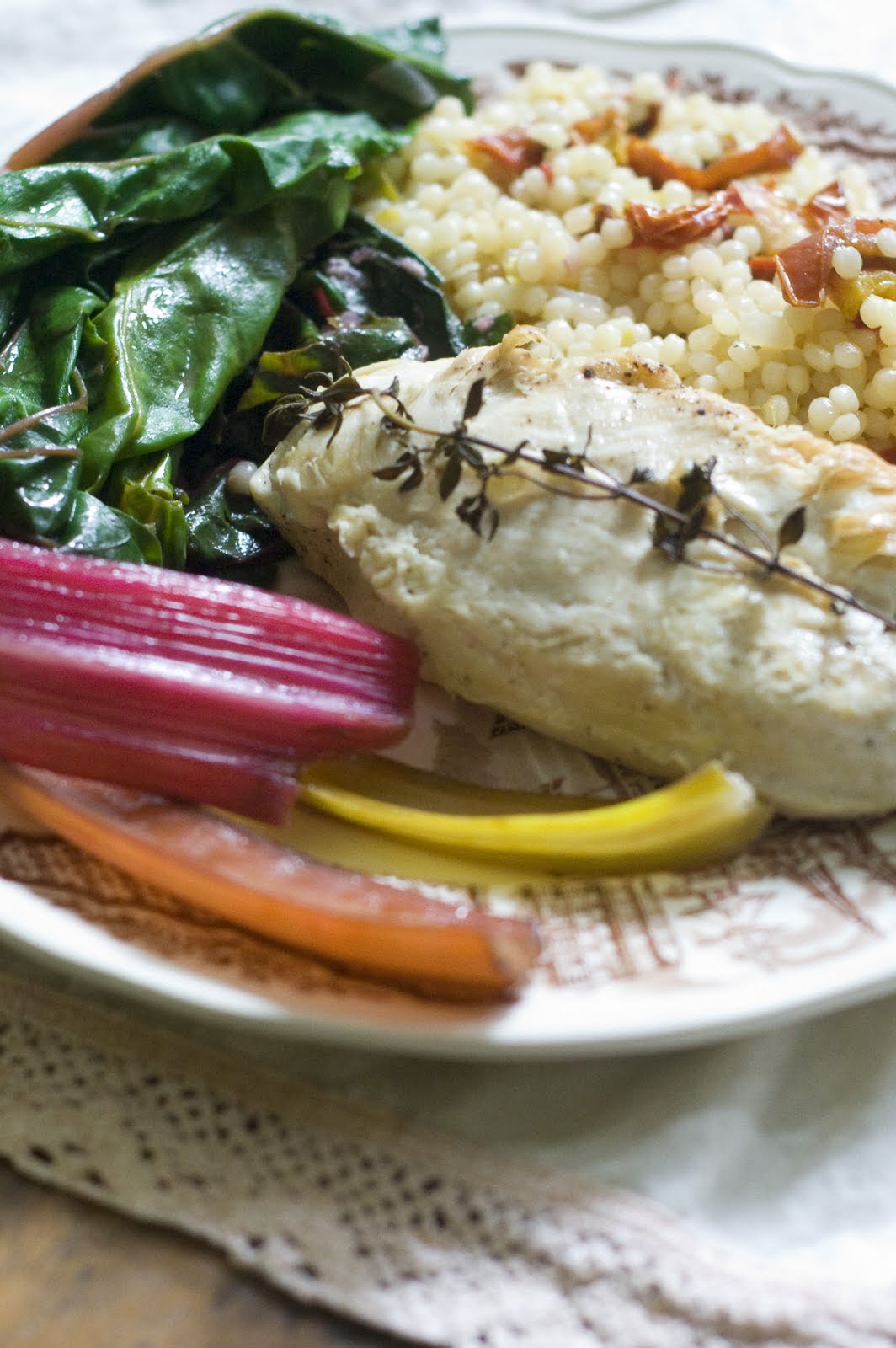 Spring time leaves no excuses. Go outside, eat more greens, work in the garden, try new healthy foods.  These are just a few of the ‘to-dos’ on my list at least.  Right now, I am doing none of them, but I am sitting outside enjoying a glass of wine, while watching Henry destroy our rose bushes, thinking of the delicious meal we just made, sauteed chicken over Israeli couscous with roasted tomatoes, and seasonal swiss chard. Hey, at least I’m outside! 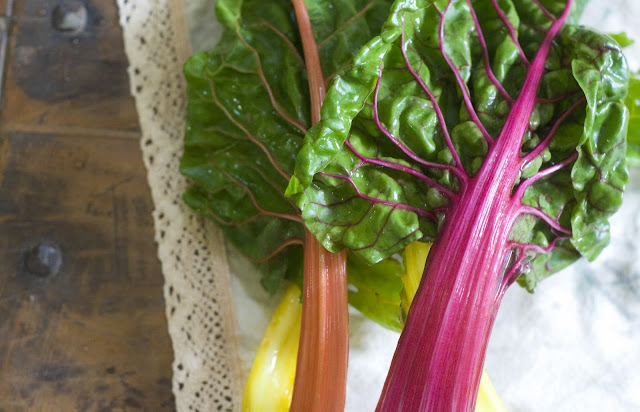 This recipe has many sources of inspiration.  Two companies, Just Bare Chicken and Shirley J, sent me products lately that I wanted to take advantage of, plus all of the variety of grains at the new Whole Foods near our house have me yearning to try something new. Plus I have been talking about eating seasonally so, I thought I should make a go of it!

Swiss Chard is in season in Utah right now, and you can purchase it in full green or in a beautiful array of seemingly unnatural rainbow colors (I went for the rainbow). I also had a few vine ripened tomatoes in my Food Co-Op share this month that I decided to slow roast, and needed to use up. Israeli couscous caught my eye in a recipe recently and I liked that it is more substantial than your average couscous and almost pearl-like.

As for the two products given to me…Just Bare Chicken mailed me a few of their natural chicken breasts to try out. I won’t complain, it fed us dinner and I usually can’t afford organic chicken so that’s a nice splurge!  And my friend at Shirley J sent me some really tasty chicken bouillon that I’ve been enjoying in several recipes.  Adding a bit of the chicken bouillon to rice, couscous or quinoa (or any grain that I make) can really boost the flavor of a dish. I’ve also added it in a few sauces and soups.

Four lucky friends who comment on this post will also be receiving one of the two products that I used (fancy chicken bouillon from Shirley J or a gift pack from Just Bare Chicken including grilling tools and coupons for chicken). That’s a pretty sizable chance to win something! Winner will be announced a week from today, Friday, June 24th. 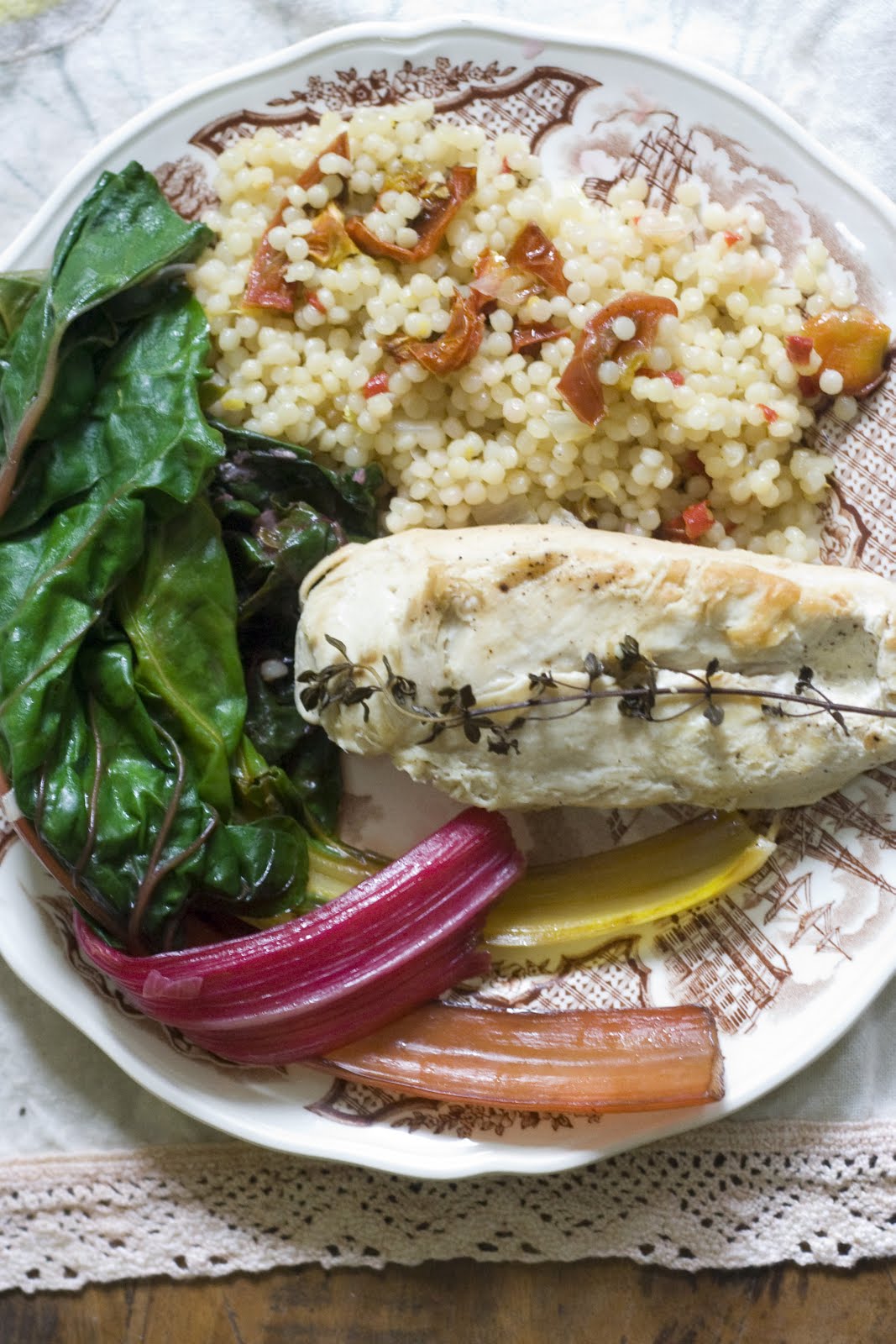 DIRECTIONS
for the Israeli Couscous
In a medium saucepan, heat 1 tablespoon of olive oil on medium-high heat. Add the couscous and cook, stirring occasionally until slightly browned and aromatic, about 3 to 5 minutes. Add the chicken bouillon seasoning and 2 cups of water and bring to a boil. Simmer for 10 to12 minutes or until the liquid has evaporated. Transfer the cooked couscous to a large bowl and set aside to cool. Toss with slow roasted tomatoes to serve.
for the chicken
Season the chicken breasts with salt and pepper.  Then sear the chicken with half of the shallot or onion in 2 TB of olive oil in heavy pan or non-stick skillet or  (to get the best flavor).  Cook 2 minutes on each side over medium high heat, then cover and cook for an additional 5 minutes on medium heat remove chicken from pan but keep warm. I used a Le Creuset dutch oven but you could also use a heavy pan with a lid.  Pan searing the chicken gives a nice brown exterior and a juicy interior to the meat.
for the swiss chard
Add the other two tablespoons of olive oil to the same pan and the rest of the shallot or onion, minced garlic, and the swiss chard. Saute the swiss chard with the onion and garlic for about 3-5 minutes until the chard is wilted but not slimy. Season with salt and pepper then add a big squeeze of lemon juice to the top.

Weekend Credits
I hope to sit down this weekend and read through Sweet Paul’s new summer issue. I think you would love it too!
Stumbled upon this blog recently, The Man Repeller, its the ultimate in what not to wear, and quite hilarious.
I’ve been really enjoying the remake of the old fashioned general store that is catching on across America.  A few of my favorites- Kaufmann Mercantile, Mohawk General Store, Tortoise, Canoe, and Heath Ceramics. Lots of fun items to browse in all of these stores.
And last but not least, check out this allergen and gluten free online store started by a couple of guys in Utah, KneadBe. Utah really does have some of the most creative and brilliant people around, right?!