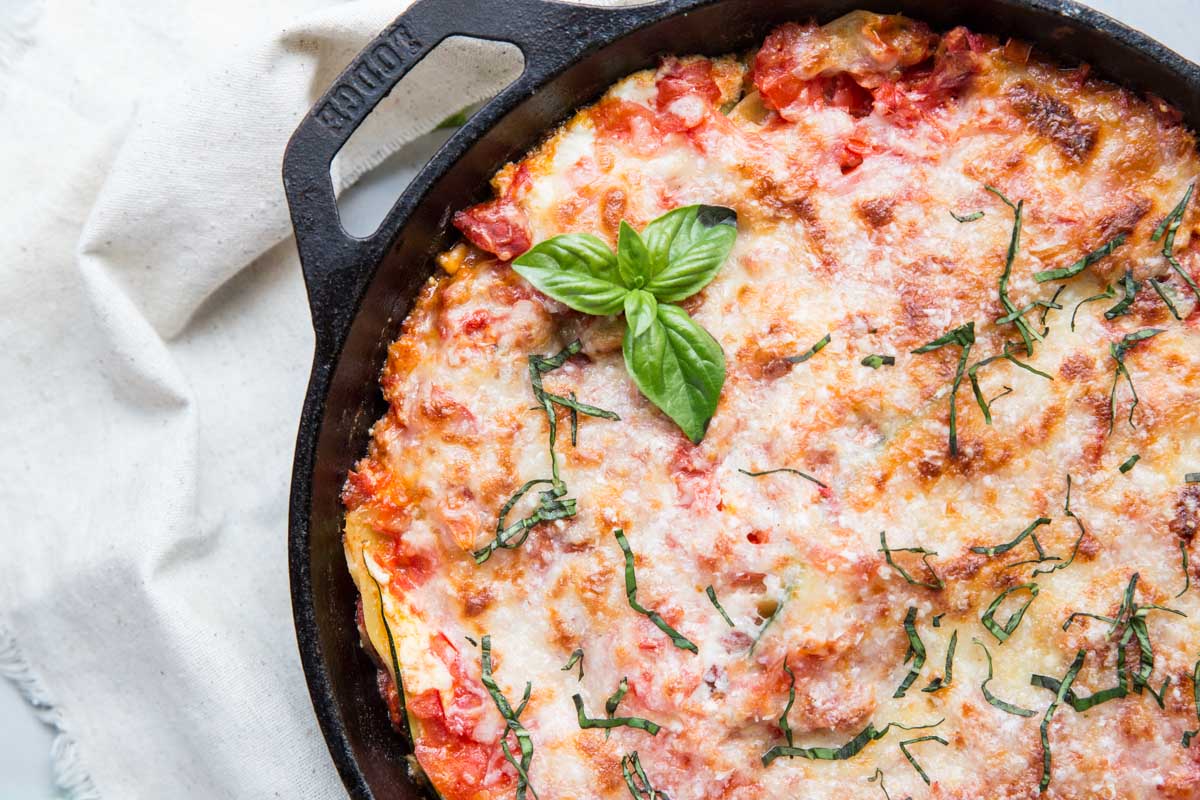 One Skillet Zucchini Lasagna, a quick and easy, gluten-free, recipe that is lighter and fresher than most lasagna recipes. 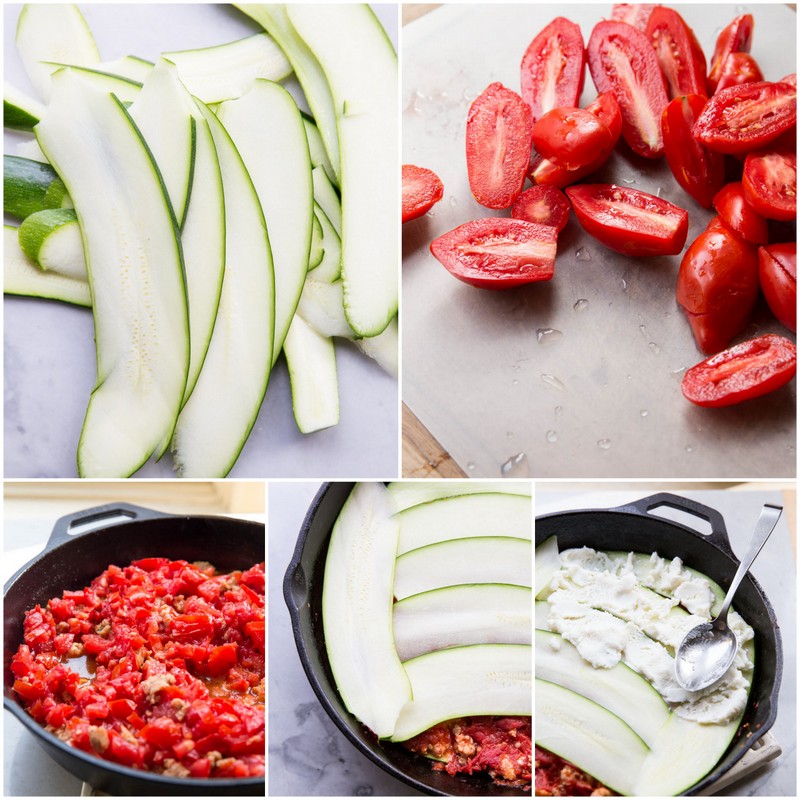 Here’s something I don’t talk about often enough on my blog… I have a TINY kitchen, I’m talking so small, and NO DISHWASHER.  Yes, you heard that right, a food blogger with an abnormally small kitchen and less modern conveniences than the average American home. We make do, and mostly with a good attitude.  I make a lot of one dish meals, actually I make mostly only one dish meals. In fact, I have a category on my blog of one dish dinners. 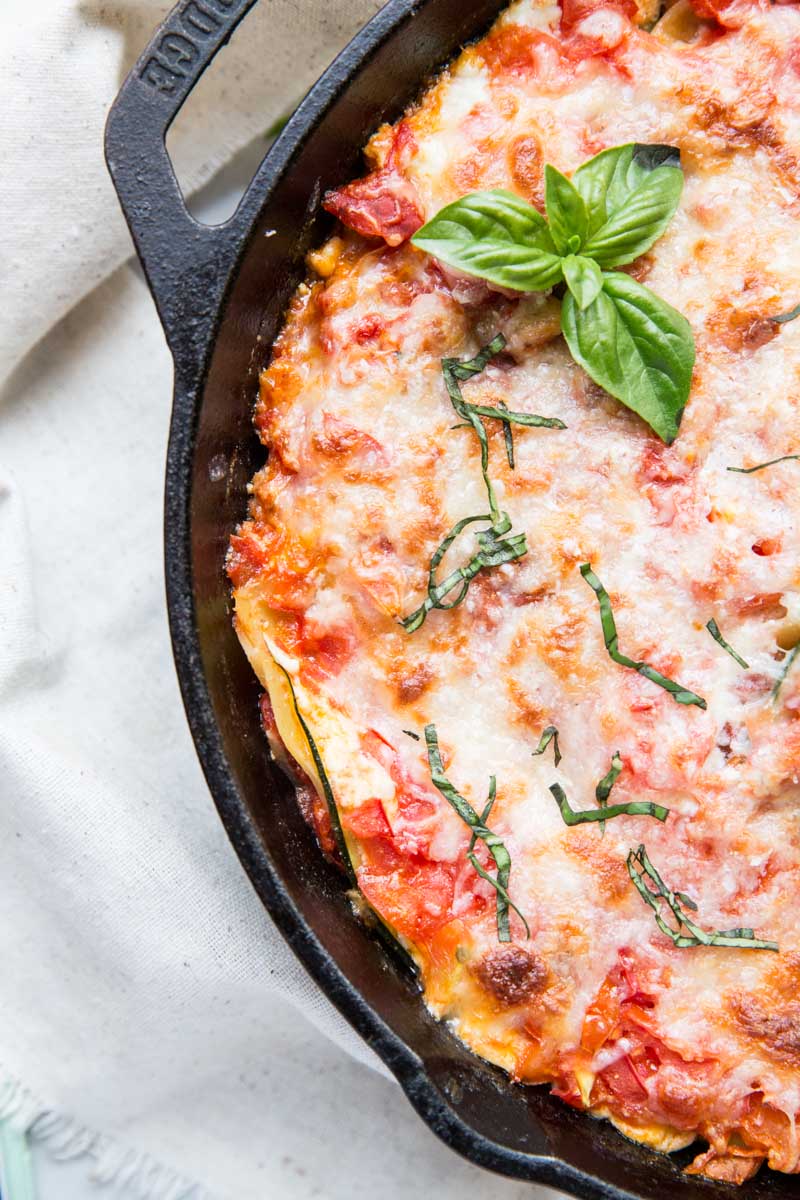 Aside from my tiny kitchen, we had a thriving garden this year!  Josh and Everett spent a few weeks in early Spring preparing the best Mother’s Day gift ever… transforming our underused backyard into several above-ground garden beds. Ironically, even with kids, we spent much more time in the backyard this year than when we had the open space!  It was such a sweet memory of the summer, watering in the morning as the baby sat out on a blanket, sitting outside in the late evenings after the kids went to bed, and going out to harvest herbs and veggies as we needed.  Everett (and Henry) would snag strawberries as they ripened and I had more tomatoes and zucchini than I knew what to do with. 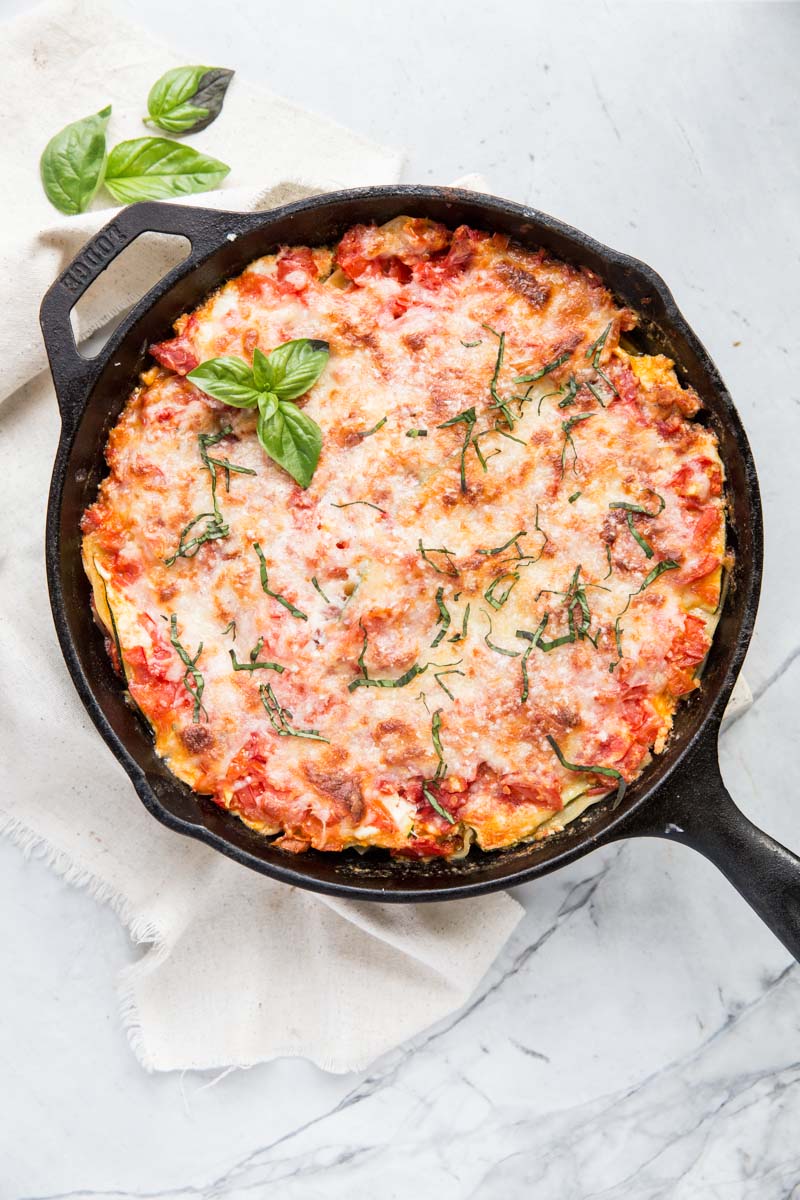 Proudly, I took all of the zucchini and made just about everything I knew to make with them… zucchini chocolate chip cookies, zucchini noodles with sauce, zucchini bread, and we would even eat zucchini sautéed with our eggs in the morning.  We didn’t tire of it, we were proud growers 🙂 Same goes with the tomatoes. We planted two San Marzano plants that outgrew even the largest tomato cages but we tried to keep up with production. 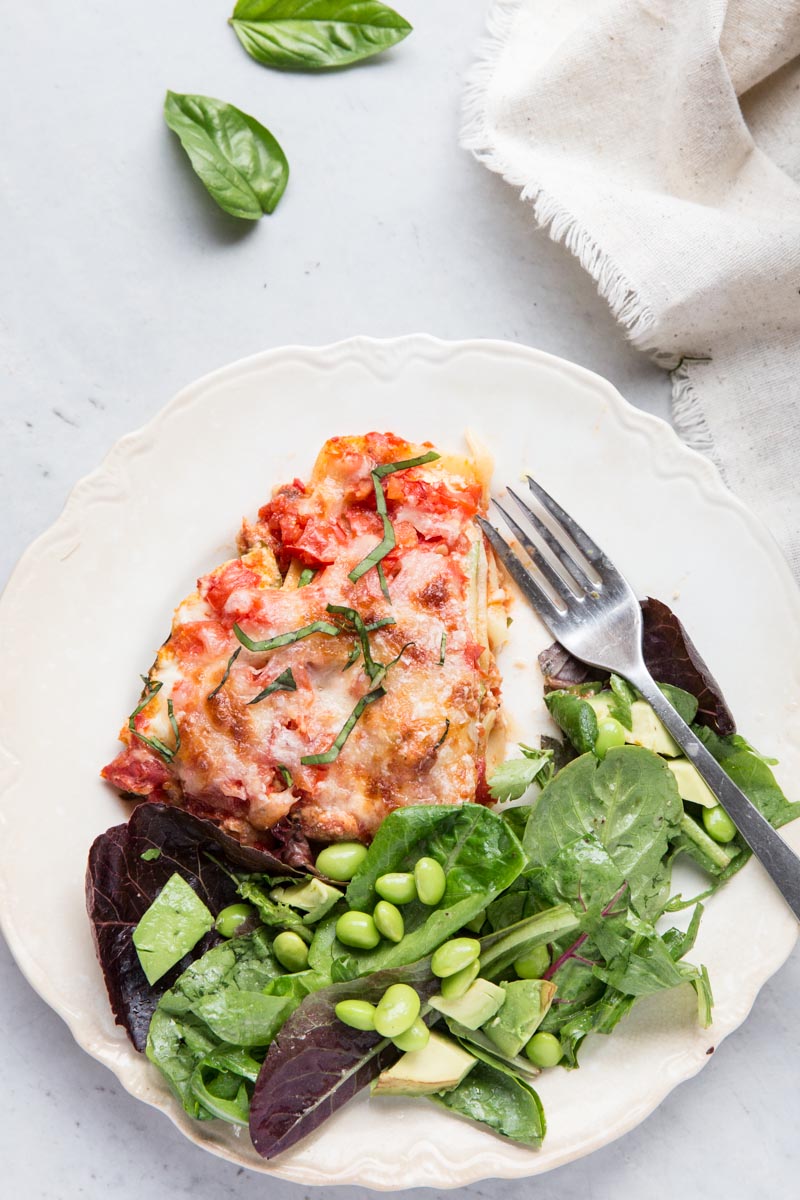 This Tomato and Zucchini Lasagna has been a go-to recipe over the last few weeks making use of both of our garden’s best products. It makes enough for two meals for our little family and we love it down to the last slice!

• I usually combine a few no boil noodles with the zucchini and make a lean (yet still comforting and hearty) lasagna but you could also go totally gluten free too. It only needs about 6 of the no boil noodles to give it a little more weight. If doing all zucchini you would still use 1 large or 2 small zucchini and layer it as directed. For the noodles and zucchini noodles you’ll need a few broken or smaller pieces for the edges… it doesn’t need to be perfect, just arrange them to cover as much of the round pan as you can.

• I use about 28 ounces of fresh tomatoes (since I have them) from my garden, but you can also use canned diced tomatoes.  IF you can find San Marzano canned tomatoes get those, they are so much better than most canned tomatoes.

• I like a combo of sausage and meat but feel free to combine whatever you prefer in your lasagna equalling about 1lb of meat.

• I like to broil the lasagna at the end of baking to crisp up the edges and get the cheese all toasty and brown. 1-2 minutes on high broil is sufficient.

• I use a lodge cast iron pan but feel free to use whatever oven-safe skillet that you have. 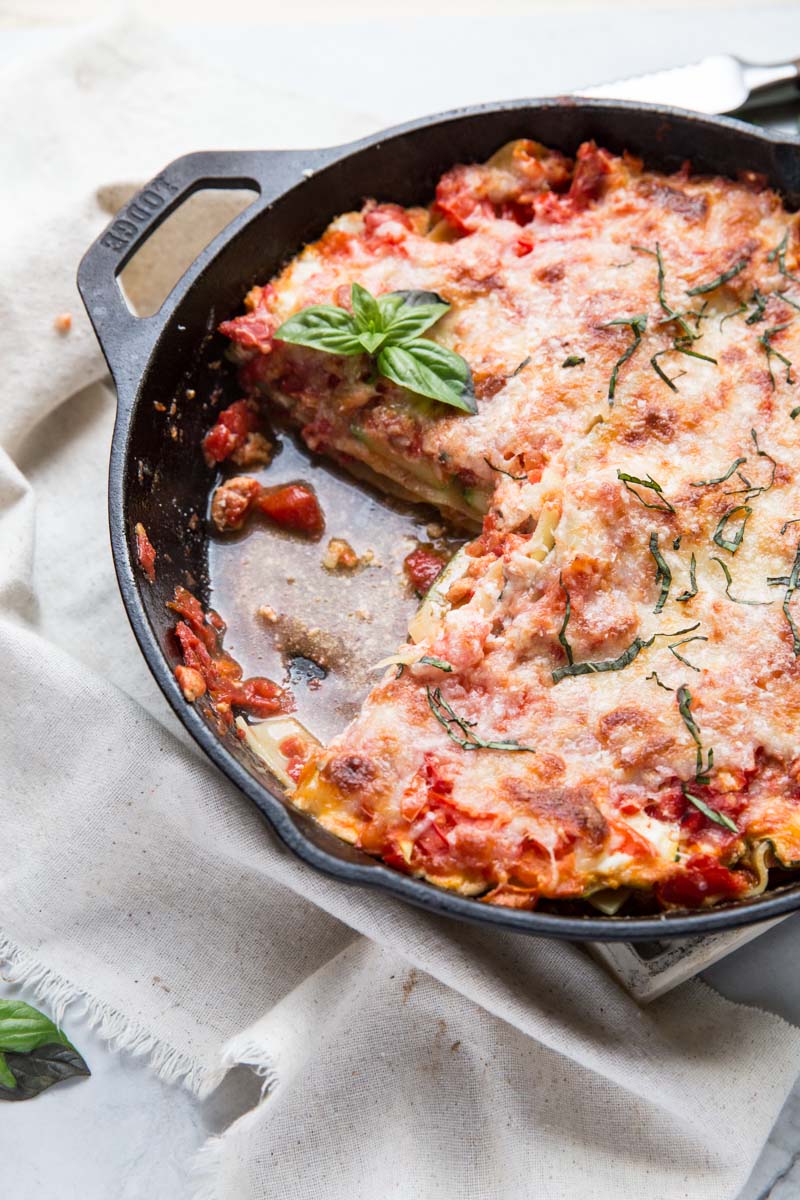 Eating what’s in season has been, for me, the best way to eat simply and healthy.  It has helped me reduce the number of dishes (alleluia), make use of my garden, and to keep a healthy weight through the year.  Follow along every month as the bloggers below and I bring you more healthy and seasonal recipes! 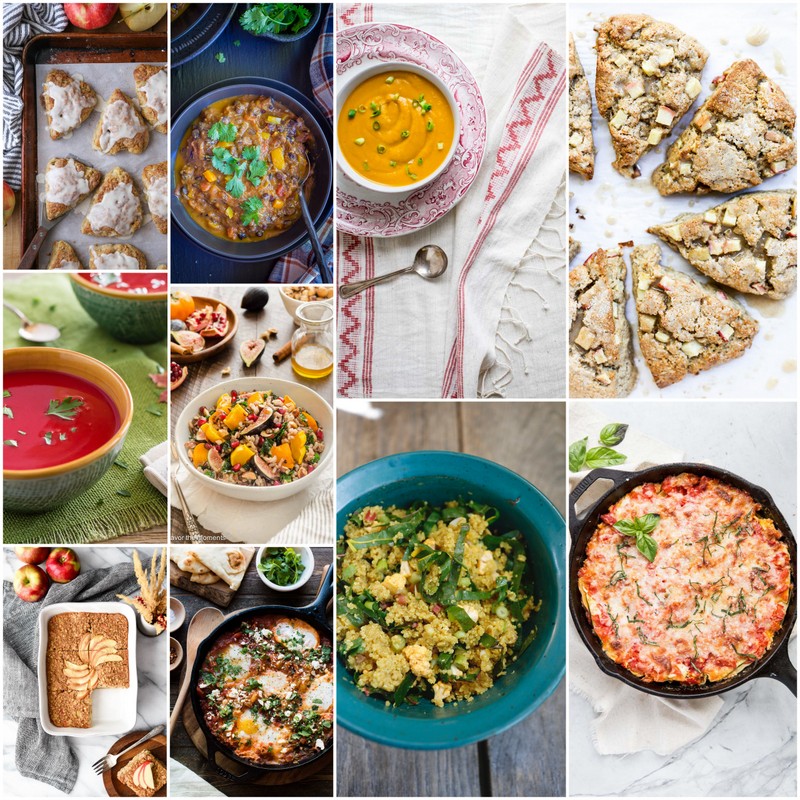 Curried Cauliflower Quinoa and Lentil Salad by Food for My Family 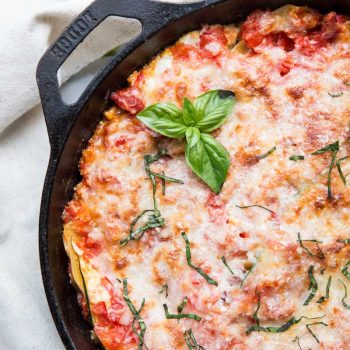 You can make this with or without the addition of the no boil lasagna noodles. IF adding, it will make the dish a big more hearty but it's still a wonderful meal and gluten free without them.  As for the tomatoes, I have been using a bowl full of our fresh tomatoes just diced up for the sauce but you can skip the step of chopping and just use a 28 ounce can of diced tomatoes.
Tried this recipe?Let us know how it was!
Posted in
Dinner, Fall, Gluten Free, One Dish Dinners, Unprocessed, Winter
Add To