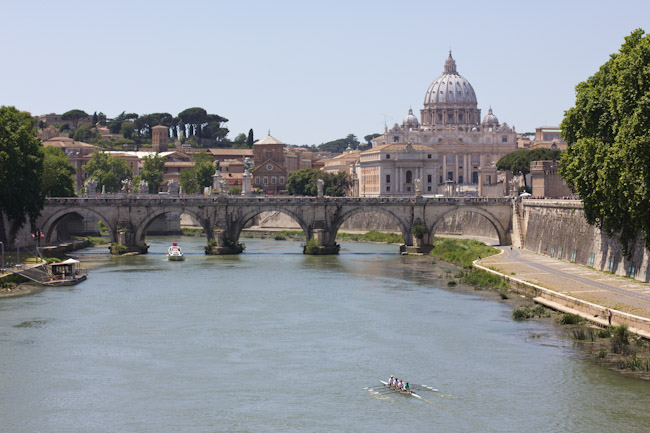 Dining and Sightseeing in Rome

Overwhelming isn’t a good enough word when trying to describe how to choose places to eat or see in Rome and having less than 36 hours to see all of Rome is almost criminal. So, as we picked the Spanish Steps as our place to explore it was kind of like twirling a globe with your eyes closed and picking a destination by wherever your finger tip landed. Of course, we tried to pack in the main sights of Rome as well but we mostly stayed near The Spanish Steps. 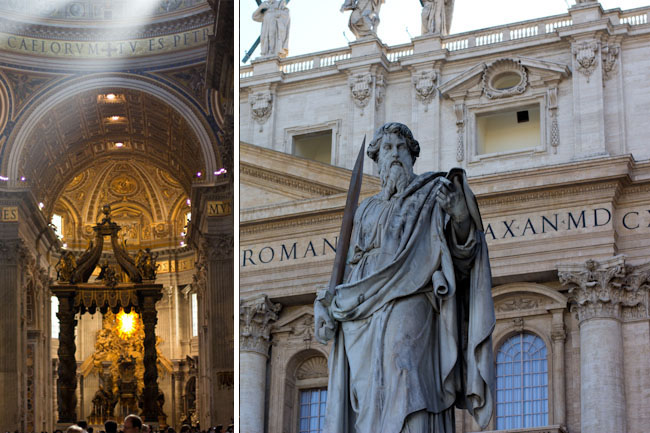 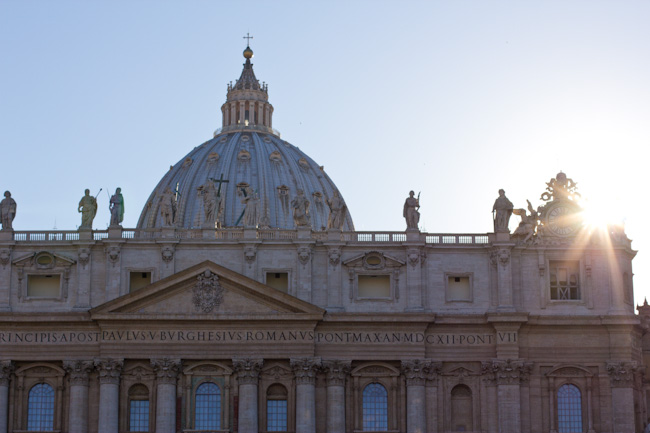 Our first night we rushed to see St. Peter’s Basilica in the evening light, taking it all in as the setting sun came in through the stain glass causing a yellow haze to fill the elaborate cathedral.  We made it to all of the ‘must-see’ sights in Vatican City, including a quick tour around the museum, a peek at the Sistine Chapel, and a wink at the Swiss guards. In a haze ourselves from the incredible and spiritual experience that walking through the Vatican is, we stumbled back towards the Metro directed to our hotel and decided to stop at the Spanish Steps for a dinner at the nearest Trattoria we could find (Trattorias are family run Italian restaurants and a good bet for finding more traditional fare).  On our way back to our hotel, we picked up cannoli from the famous Caffe Greco, then fell asleep  that night happily dreaming of their creamy marscapone and chocolate chip filled cannoli. 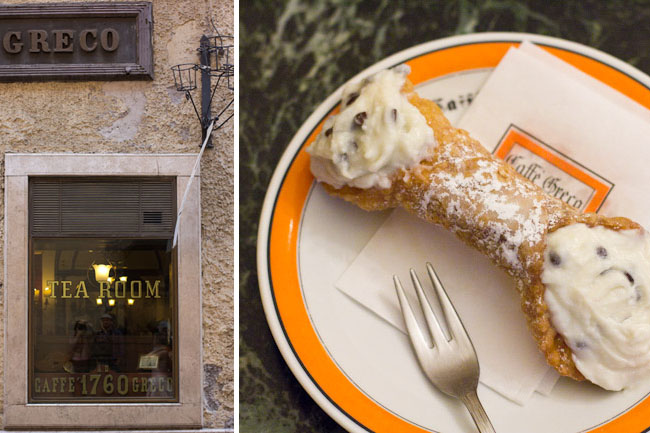 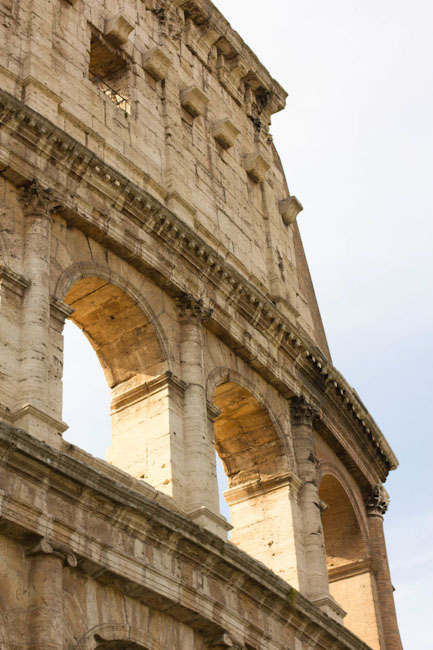 The next day we started out early, walking around the Colosseum while listening to Rick Steve’s free audio guide describing the scene and history of this grand amphitheater. Then we took a little self guided walking tour starting from the Spanish Steps, walking past the the Trevi Fountain, through Plaza Navona with its slew of local artists and elaborate fountains and ending at Campo di’Fiori, where we’d heard we could get a fabulous slice of pizza. 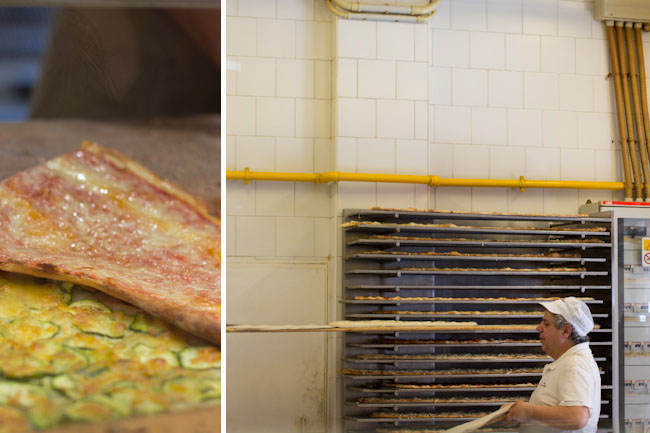 At Forno you order pizza by the slice, which comes fresh from their brick oven.  Normally, you don’t want to buy pizza by the slice at lunch time because it usually guarantees its not fresh or baked in a brick oven.  The cooks would have to wake up very early to have started heating their brick oven for it to be ready in time for lunch.  But at Forno the brick oven is hot and ready for use even at noon.  I had also gotten a secret from a blogger pal, that the zucchini pizza at Forno was almost magical so I already knew what I’d choose as we went through the line. After lunch we  casually perused around Piazza, through the food stands, meeting this guy, and checking out all of the local produce and spices.

After an afternoon rest at our hotel, we headed back to the Spanish Steps for a stroll through the popular city blocks and our final dinner in Italy.  We stopped in art stores, a pasta shop, and walked through several specialty food markets taking in all of the sights and smells that Rome offers. 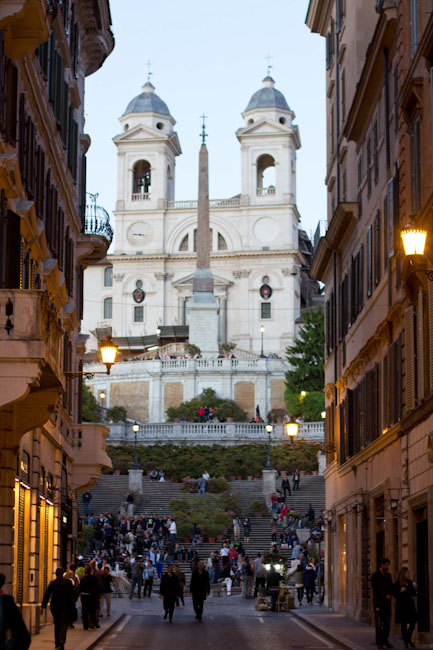 Our trip ended perfectly in a little family run Italian restaurant off a small street of the Spanish Steps. At Il Gabriello we had the best wine of our trip, the best buffalo mozzarella on the planet, the freshest pasta I’ve ever tasted, and a meal to top all other meals.  We savored every minute, knowing we had the trip of a life time. But it wasn’t over just yet.  A couple scoops of gelato would be our ending. While standing at the top of the Spanish Steps and overlooking the city we tasted the rich flavors of true Italian gelato and a friendship and love just enhanced by the romance of Europe. 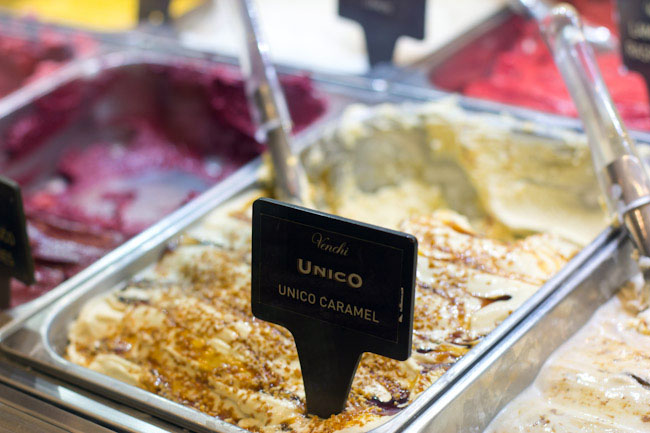 If you only have a short time in Rome, I recommend hitting the main sights then more deeply exploring one neighborhood.  Here are a few recommendations for the Spanish Steps neighborhood.

The Food Scene of the Spanish Steps

Venchi, Via della Croce (rich and natural gelato flavors made by a chocolate company)

Caffe Greco, Via Coondotti 86 (stop in this historic cafe for cannoli or cappuccino)

Il Gabrello, Via Vittoria 51 (our last and best meal in Rome) 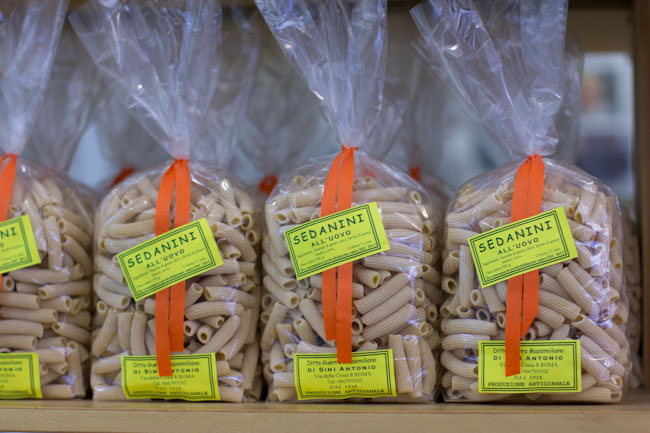