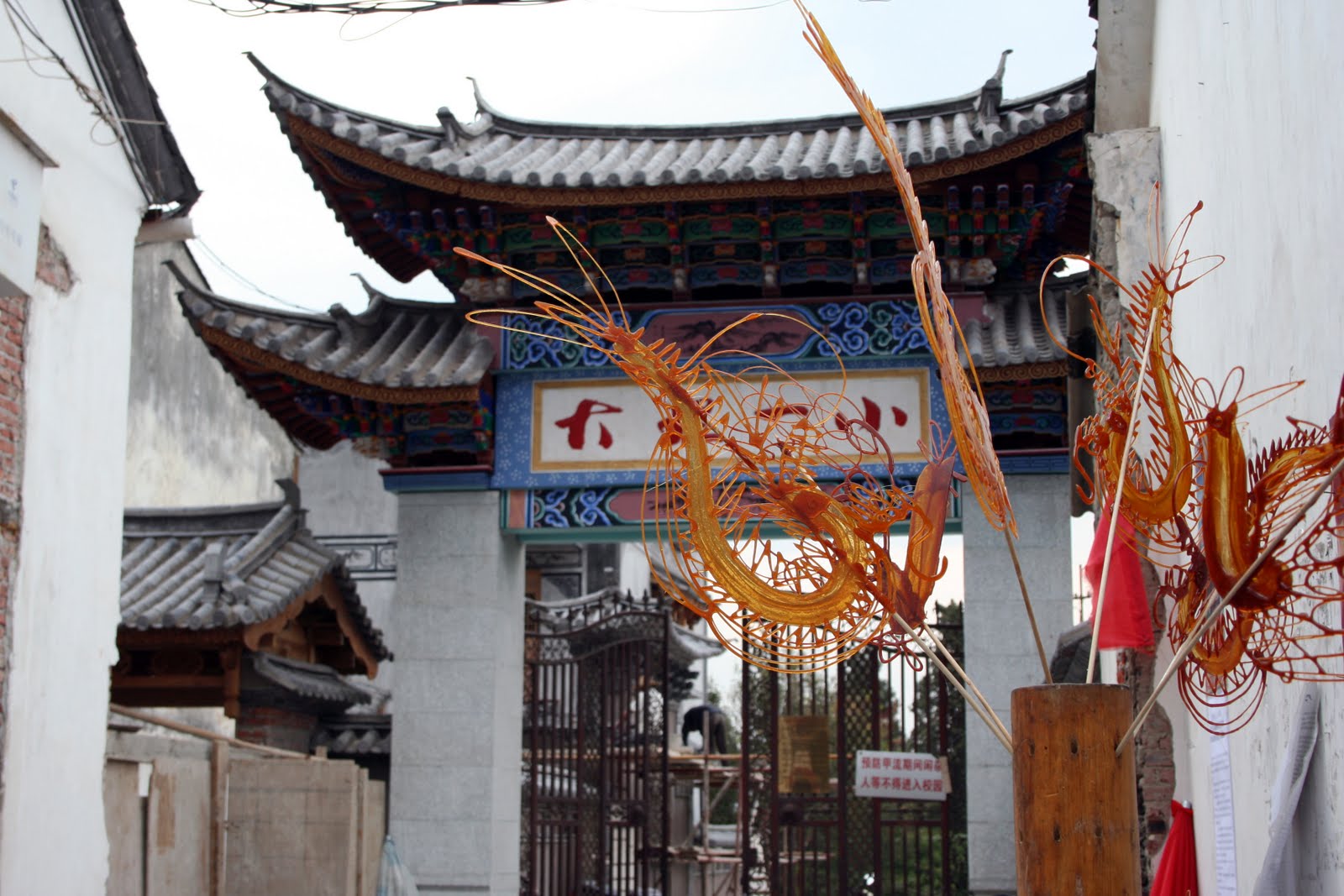 In describing the city of Dali, my sister said, this is what you hope all of China to be like. It’s a smaller Chinese city, population of only about 600,000. What used to be the ancient capital city of its province, flourishing in the 8th century, is now a peaceful and charming spot. The old town part of Dali was built during the Ming Dynasty (1368–1398) and is now been transformed to a historic destination for backbackers, showcasing some of the most beautiful architecture, interesting shops, and high quality Chinese food. 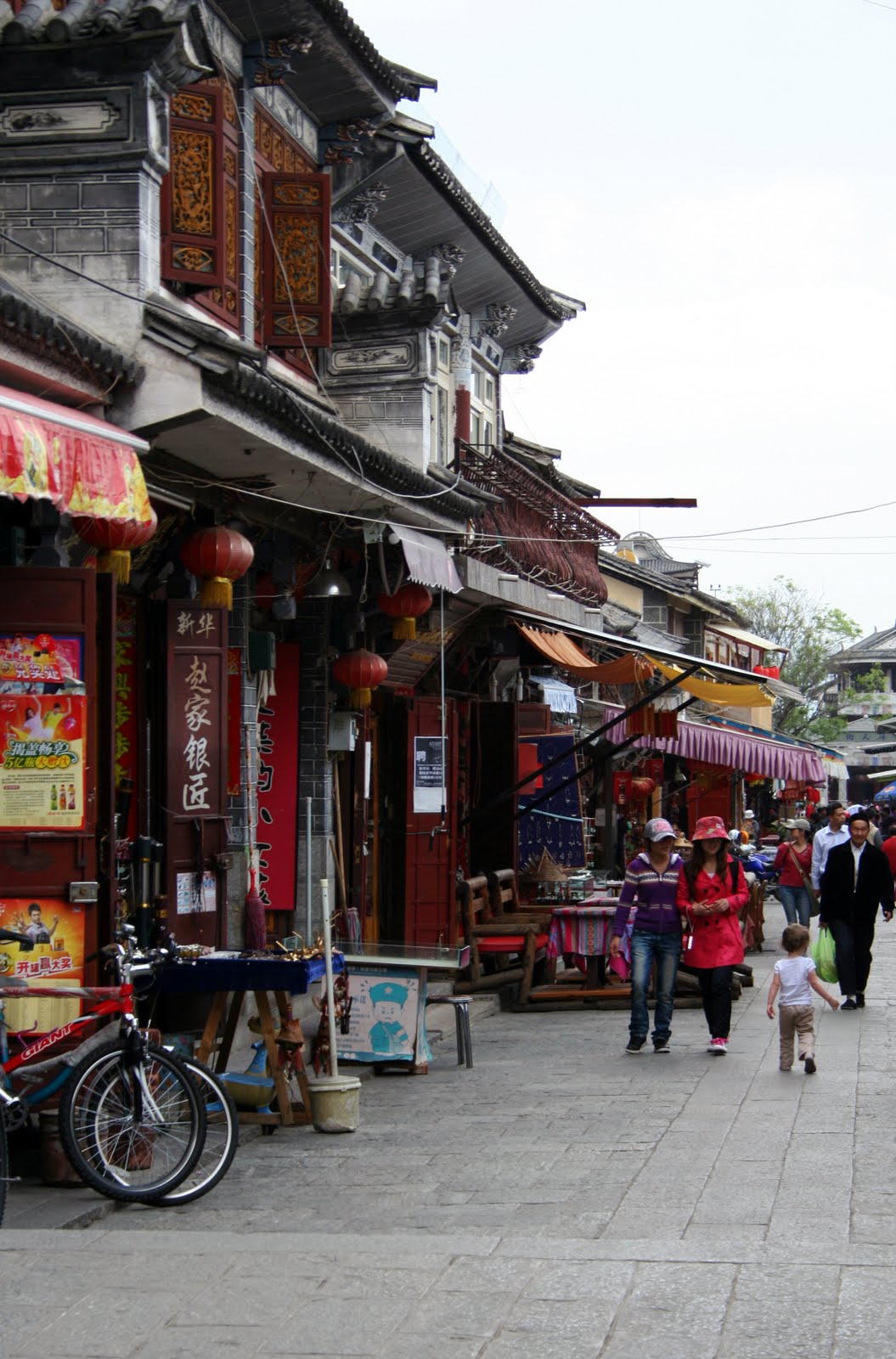 Our adventure to this magical asian city was an eventful one! We took a ‘luxury’ bus from Kunming to Dali, which was a 4%2B hour drive. About 30 minutes into the trip we discovered that we needed our passports to check into the hostel we were staying at. In a panic we phoned a friend and were able to find someone who would go to my sister’s apartment, printer in hand, and scan copies of our passports then email them to us. I can only imagine walking the streets of China with a printer in hand. It is crazy enough trying to cross your streets with nothing in hand. But we were so thankful.

Even with the scanned documents we were unsure if the hostel would allow us to stay without having our passports in hand. But we continued our drive in the stuffy bus with sounds of people spitting in buckets along the rows (because this is what you do in China??) in hopes of everything working out. Once we got to the city, we discovered that my ever so kind yet absent minded sister forgot to print the address of the hostel. We got off the bus, suitcases, 2 year old, and baby bed in hand, without knowledge of where to go next. We took a taxi to the general area of where my sister thought the hotel was then we roamed the streets until we found a Internet Cafe. We were never so thankful to see an alley way with a bright blue Internet sign suspended on the wall of an ancient Chinese building. My sister sat down at a computer and all of our problems were quickly solved at the few clicks of a mouse. Oh how I do love some of the more modern conveniences of life! 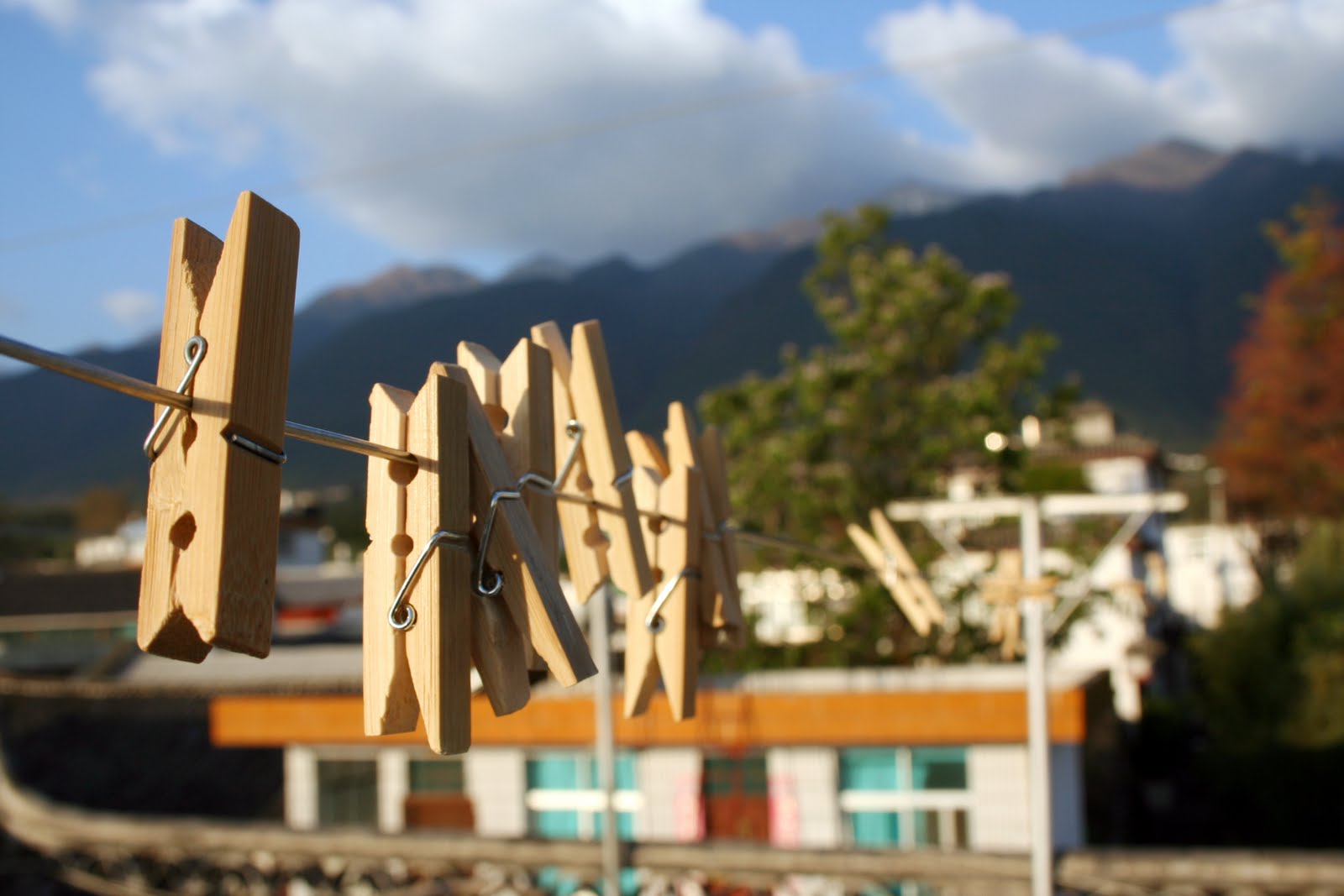 We settled down at our comfortable hostel, The Lily Pad, (with soft beds and western toilets I might add), and thanked God that He had taken care of us! This is probably just one small example of what life in China would be like I’m guessing, an adventure where even if you try to be in control you quickly realize your limitations in such a foreign culture. 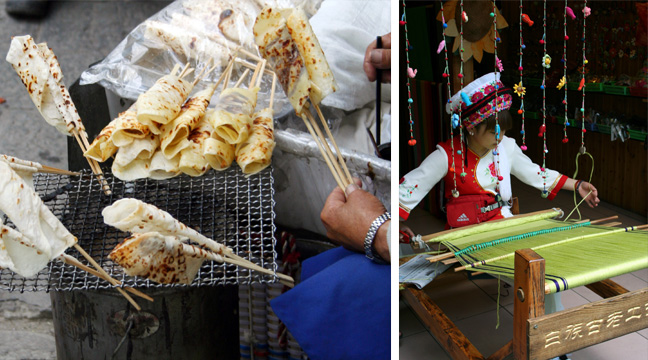 The rest of our time in Dali was absolutely perfect! We browsed the streets of Old Town Dali, browsing the stores to see what the local culture had to offer us. Many of the best handicrafts come from the minority group of the area, the Bai people. Of course we found several wonderful things to buy, a hand woven scarf, an iron coffee grinder, and a couple of hand carved wood pipes. I also enjoyed trying some of their famous street food, the traditional milk fan or ‘rushan,’ an aired yogurt-milk mix that is stretched into a thin sheet then caramelized and wrapped around a stick. 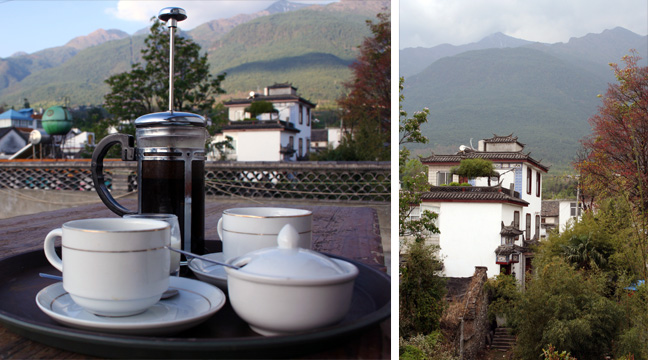 We had several good meals at our hostel, and even enjoyed French Press Coffee one morning on the open roof top of the hostel! The staff was more than accommodating, they were friendly and made us feel right at home. 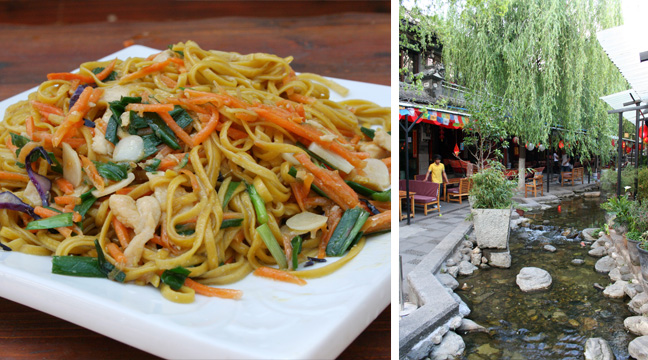 All of the Chinese restaurants in Dali proudly exhibited what foods they were serving that day by displaying the fresh foods outside their cafe doors. It was fun to walk around and see what each restaurant had to serve. We also indulged in some American Food while we were there and I had some of the most amazing fluffy pancakes, served with lemon curd and Greek Yogurt at the Black Dragon Cafe.

Dali proved to be an enchanting place to visit and a worthwhile stop for anyone exploring China. 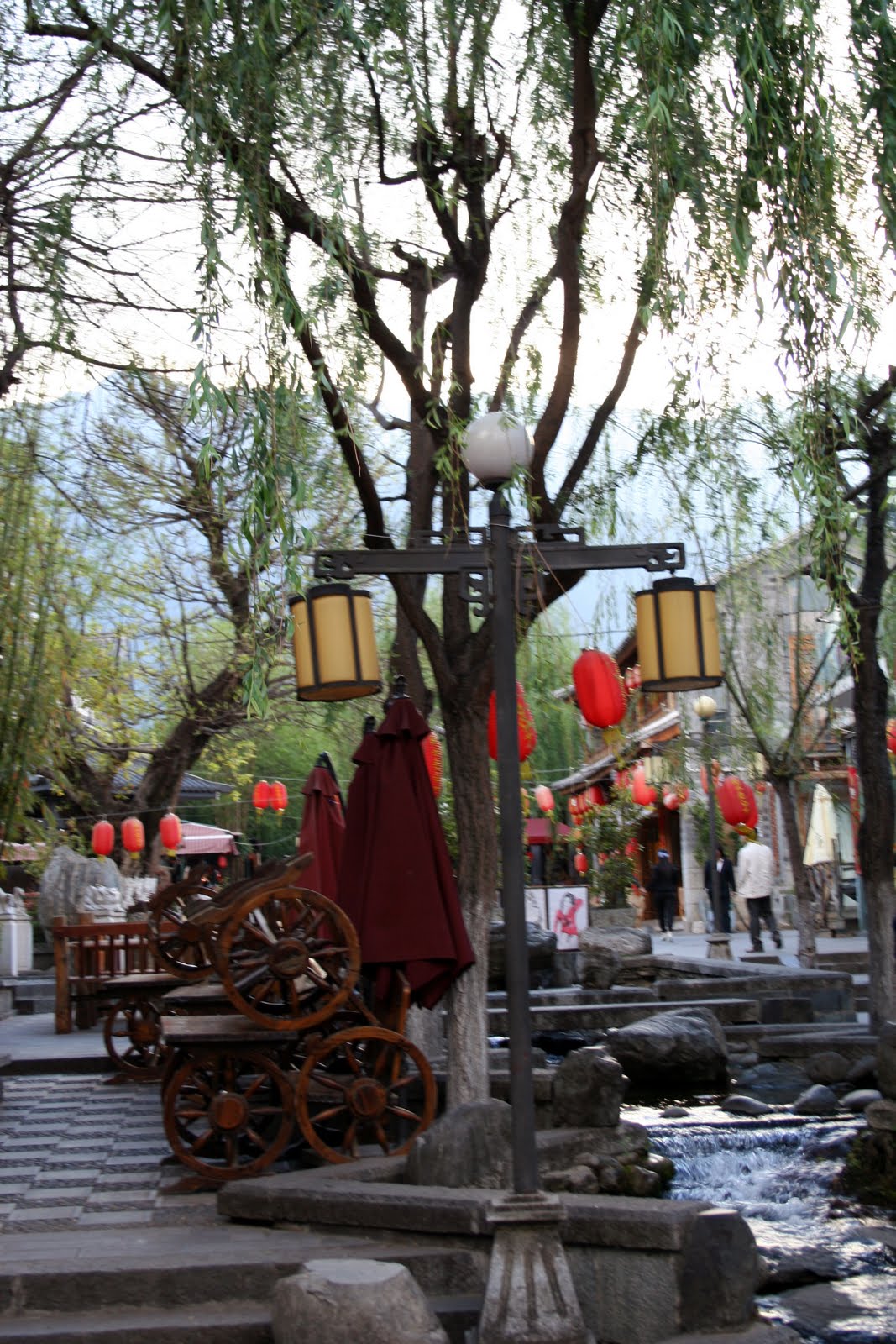 Here are some recommendations for Dali:

Sites:
Walk around Old Town Dali
Take the Gondola or Lift up the Mountain to view the city and Lake Erhai from above
Visit the Ancient Pagodas (We actually didn’t want to pay to see them so we just admired them from a far).

Local Foods:
Milk Fans, sold on the streets
Walnut Cakes, tasty little treats and fun to watch them being made